Last Sunday, 16th October, the Bay of Roses Club organised the 19th Seabed Clean-up, an annual event held in collaboration with the Roses Marina and the City Council's Department of the Environment, which on this occasion removed a total of 370 kg of waste from the seabed of the Roses harbour.

The specific area where Sunday's action took place was the area of the Marina's breakwater, a space occupied by the traffic boats, and allowed the removal of a large quantity of plastic bottles, cans, carpets, boat fenders... and even an iPhone.

Port de Roses collaborated with this initiative with the contribution of professional divers from its staff to remove these materials from the seabed, as well as two skippers in charge of driving and handling a Pelikà boat for waste collection and a zodiac who was in charge of securing the perimeter where the work was being carried out.

With actions like this, the Marina complies with the environmental requirements demanded by the Blue Flag, as well as the EMAS and ISO 14001 certifications that it has held since 2007 and which guarantee the minimisation of the port's activity on the environment, acting on aspects such as the reduction of the consumption of energy resources and water, the correct management of waste, the control of anchoring in the coves and beaches of the municipality, or the collection of floating waste from the coast, among others. 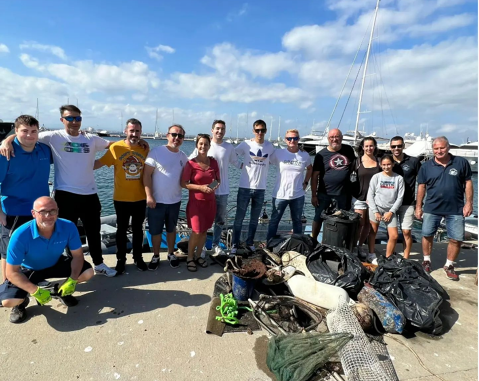